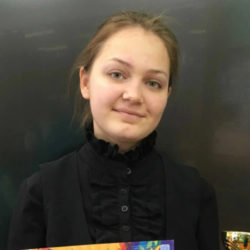 In the hours after | was murdered, as my mother made phone calls and my father began going door to door in the neighborhood looking for me, Mr Harvey had destroyed the hole in the cornfield and took away the bag filled with my body parts. He walked not far from the houses where my father stood talking to our neighbors, leaving traces of me behind him — smells the neighbors’ dog would pick up and follow to find my elbow, smells the rain of the next three days would wash away. He carried me back to his house, where, while he went inside to wash up, I waited for him.

After the house was sold, the new owners saw the dark spot on the floor of their garage. The realtor had said it was oil, but it was me, leaking out of Mr Harvey’s bag onto the concrete. The beginning of my secret signals to the world.

Later I realized that I wasn’t the first girl he’d killed. He knew to take away my body from the field. He knew to watch the weather and to kill right before the rain because it would wash away all the evidence. But he was not careful enough. He forgot my elbow and used a cloth sack for a bloody body.

As he washed his body in the hot water of his bath his movements were slow. He felt calm. It was bathroom and he felt the warm water wash me and of me away.

Mr Harvey put the bag with my body in an old safe a drove it to a sinkhole eight miles from our neighborhood In his car he played a radio station with Christmas carol because it was December. He whistled and congratulated himself. Better and better he was getting now, never killing the same way, but making each kill a surprise to himself, a gift to himself.

I had a memory of going down this road with my father and Buckley. My father had asked if any of us wanted to watch a refrigerator disappear.

“The earth will swallow it!” he said.

“The earth has a mouth?” Buckley asked.

“I’ll go,” I said. My father had told me that there was a huge sinkhole, now used for garbage. I didn’t care; I just wanted to see the earth swallow something.

So when I watched Mr Harvey take me to the sinkhole, I thought how smart he was. How he put the bag in a metal safe. It was late when he got there. He left the safe in his car and walked to the house of the Flanagans who lived near the sinkhole and owned it. The Flanagans made money letting people dump their waste there.

Mr Harvey knocked on the door of the small white house and a woman opened it.

“Good evening, sir,” Mrs Flanagan said. “Got something?” “It’s in the back of my car,” Mr Harvey said. He gave her a twenty-dollar bill.

“What have you got in there, a dead body?» she joked. She didn’t really think so.

Mr Harvey smiled. “An old safe of my father’s, finally got

“Is there anything in it?” she asked.

“That would be lovely,” he said.

The Flanagans never thought that the girl they had read about in the newspapers was in the gray metal safe that a lonely man brought there one night and paid them twenty dollars to throw it in the sinkhole.

Then he drove down the road to a building site. No one was around — only me. I stayed with him to see what he saw, to go where he would go.

He got out of his car and fingered the charms one last time. He liked the Pennsylvania keystone with my initials, so he pulled it off and put it in his pocket. Then he threw the bracelet into the mud.

Two days before Christmas, I watched Mr Harvey read a book which gave him an idea to build another of his shelters. He decided he wanted to build again, to experiment as he had with the cornfield hole. He would get the simple materials and build it in a few hours in his backyard. After smashing all the ships in bottles, my father found him there.

It was cold out, but Mr Harvey wore only a thin cotton shirt. He had turned thirty-six that year.

“What’s this?” my father asked.

My father was strong. He was a bigger man than Mr Harvey. So when he walked around the front ol the green house an into the backyard, where he saw Mr Harvey building soinet. Mr Harvey became alert.

“What’s this?” my father asked again.

Mr Harvey stopped to look at him and then turn to his work.

There was a moment of quiet, and then Mr Harvey asked my father if he wanted to help.

So it was that from heaven I watched my father build a tent with the man whod killed me.

When the basic structure was done, Mr Harvey went toward the house without giving a reason. My father thought it was a break time. That Mr Harvey had gone in to get coffee or tea.

Mr Harvey went into the house and up the stairs to check the knife that he had kept in his bedroom. It was still on his desk where he also kept his sketch pad in which, often, in the middle of the night, he drew the designs in his dreams. My blood on the knife had turned black.

It had begun to snow outside. It was the first snow since my death, and my father noticed it.

I focused very hard to give him a vision. I thought 1 could do it, but on Earth nothing happened.

Through the snow I noticed that my father was looking at the green house in a new way. He had begun to wonder.

When Mr Harvey came out of the house, it was like an electric shock.

“You know something,” my father said.

He met my father’s eyes, but did not speak.

When my father moved toward him, Mr Harvey put his hand up.

“That’s enough now,” he said. “Why don’t you go home?” The time had come for my father to think of something to say. But all he could think of was this: “Susie,” he whispered.

“You know something,” my father said.

Later my father checked what he knew about Mr Harvey. Had anyone asked this man where he was the day I disappeared? Had anyone seen this man in the cornfield?

I stood alone in my heaven. On Earth the snowflakes fell softly.