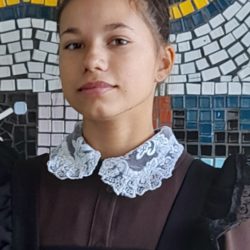 Jack and the beanstalk.

This is the story of a little boy. His name is Jack. Jack lives with his mother . They are poor. They have got a goat, but the goat doesn’t make any milk. « Go to the market and sell our goat” , says the Jack’ s mother. Jack is sad, because he loves the goat. Jack takes the goat to the market. « Please, buy my goat . It doesn’t make any milk, but she is beautiful “, says Jack. But nobody want to buy the goat. A good man sees Jack and the goat. «That is a beautiful goat . Are you selling it ?” asks the good man. “ Yes. Please buy my goat” says Jack. The good man gives Jack some beans. “ These are magic beans “ says good man. Now Jack is happy. Jack goes home. “Have you got any money ?” asks his mother . “ No, but look, I have got these magic beans”, says Jack.

“Magic beans?» shouts Jack’s mother. “ You are silly boy Jack”. She throws the magic beans into the garden. Jack and his mother have got one potato for dinner. They eat the potato. They are hungry and sad. In the morning Jack goes into garden. He wants to find magic beans. But there aren’t any magic beans in the garden. Now , there is a very big beanstalk . A very , very big beanstalk.It goes up into the sky! “ It’s magic ! “ shouts Jack. There are lots of big beans on the beanstalk. Jack wants to pick the beans for his mother. She can cook them. Jack climbs the beanstalk . Jack climbs up and up. He doesn’t stop. He goes up and up.

Now Jack is at the top of beanstalk. He is on a cloud. It is magic. There is an old woman an another cloud. She smiles .“ Hello Jack” says the old woman. “ I remember your father “ says the old woman. “ Listen , Jack. A big giant has got your father’s gold coins. “Where is the big giant? “ asks Jack. “ I want to get the gold coins for my mother. We are very poor.” He lives in that castle “ says the old woman. Jack goes into the castle. He is quiet. He doesn’t want the giant to hear him. Jack looks for his father’s coins. The gold coins aren’t under the table. They aren’t under the big chairs. Bang! Bang! Jack hears a noise.Oh !No! It’s a giant, Jack hides in a chest. The giant comes in and sits down. Jack watches the giant . The giant has got a sock.There are gold coins in the sock. They belong to Jack’s father. The giant counts the gold coins “ Ha , ha, ha . Hee , hee, hee. I love gold coins. One, two, three” he says.

“ Mother ! Look I’ve got my father’s gold coins “ shouts Jack. Jack tells his mother his story. She doesn’t believe him, but she smiles and she says . “That’s a beautiful story , Jack”.