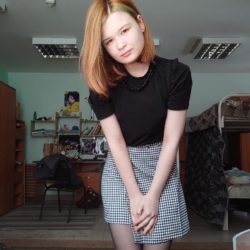 The day my son Laurie started kindergarten he renounced

with a belt; I watched him go off the first morning with the

older girl next door, seeing clearly that an era of my life was

ended, my sweet-voiced nursery-school tot replaced by a longtrousered, swaggering character who forgot to stop at the corner and wave good-bye to me.

He came home the same way, the front door slamming

open, his cap on the floor, and the voice suddenly become raucous shouting, “Isn’t anybody here?”

At lunch he spoke insolently to his father, spilled his baby

sister’s milk, and remarked that his teacher said we were not to take the name of the Lord in vain.

“How was school today?” I asked, elaborately casual.

“Did you learn anything?” his father asked.

Laurie regarded his father coldly. “I didn’t learn nothing,”

“Anything,” I said. “Didn’t learn anything”

“The teacher spanked a boy, though,” Laurie said, addressing his bread and butter. “For being fresh,” he added,

with his mouth full.

Laurie thought. “It was Charles,” he said. “He was fresh.

The teacher spanked him and made him stand in a corner. He

“What did he do?” I asked again, but Laurie slid off his

chair, took a cookie, and left, while his father was still saying,

The next day Laurie remarked at lunch, as soon as he sat

“Good heavens,” I said, mindful of the Lord’s name, “I

suppose he got spanked again?”

“What?” his father said, looking up.

“Why did Charles hit the teacher?” I asked quickly.

“Because she tried to make him color with red crayons,”

Laurie said. “Charles wanted to color with green crayons so he

hit the teacher and she spanked him and said nobody play with Charles but everybody did.”

The third day—it was Wednesday of the first week—Charles

her bleed, and the teacher made him stay inside all during recess. Thursday Charles had to stand in a corner during storytime because he kept pounding his feet on the floor. Friday Charles was deprived of blackboard privileges because he threw chalk.

On Saturday I remarked to my husband, “Do you think

kindergarten is too unsettling for Laurie? All this toughness,

and bad grammar, and this Charles boy sounds like such a bad influence.”

“It’ll be all right,” my husband said reassuringly. “Bound to

he shouted as he came up the hill; I was waiting anxiously on

the front steps. “Charles,” Laurie yelled all the way up the hill,

“Come right in,” I said, as soon as he came close enough.

“You know what Charles did?” he demanded, following me

through the door. “Charles yelled so in school they sent a boy

keep quiet, and so Charles had to stay after school. And so all

the children stayed to watch him.”

“He just sat there,” Laurie said, climbing into his chair at

“Charles had to stay after school today,” I told my husband.

“Everyone stayed with him.”

“What does this Charles look like?” my husband asked

Laurie. “What’s his other name?”

“He’s bigger than me,” Laurie said. “And he doesn’t have

any rubbers and he doesn’t ever wear a jacket.”

Monday night was the first Parent-Teachers meeting, and

only the fact that the baby had a cold kept me from going; I

Laurie remarked suddenly, “Our teacher had a friend come to

see her in school today.”

“Charles’s mother?” my husband and I asked simultaneously.

“Naaah,” Laurie said scornfully. “It was a man who came

and made us do exercises, we had to touch our toes. Look.”

He climbed down from his chair and squatted down and

touched his toes. “Like this,” he said. He got solemnly back

into his chair and said, picking up his fork, “Charles didn’t

“Naaah,” Laurie said. “Charles was so fresh to the teacher’s

friend he wasn’t let do exercises.”

“He kicked the teacher’s friend,” Laurie said. “The

and Charles kicked him.”

“What are they going to do about Charles, do you suppose?” Laurie’s father asked him.

Laurie shrugged elaborately. “Throw him out of school, I

Wednesday and Thursday were routine; Charles yelled during story hour and hit a boy in the stomach and made him cry.

With the third week of kindergarten Charles was an institution in our family; the baby was being a Charles when she

cried all afternoon; Laurie did a Charles when he filled his

wagon full of mud and pulled it through the kitchen; even my

husband, when he caught his elbow in the telephone cord and

pulled telephone, ashtray, and a bowl of flowers off the table,

During the third and fourth weeks it looked like a reformation in Charles; Laurie reported grimly at lunch on Thursday of the third week, “Charles was so good today the teacher gave

“What?” I said, and my husband added warily, “You mean

“Charles,” Laurie said. “He gave the crayons around and he

picked up the books afterward and the teacher said he was her helper.”

“What happened?” I asked incredulously.

“He was her helper, that’s all,” Laurie said, and shrugged.

“Can this be true, about Charles?” I asked my husband that

“Wait and see,” my husband said cynically. “When you’ve

got a Charles to deal with, this may mean he’s only plotting.”

He seemed to be wrong. For over a week Charles was the

teacher’s helper; each day he handed things out and he picked things up; no one had to stay after school.

“The P.T.A. meeting’s next week again,” I told my husband

one evening. “I’m going to find Charles’s mother there.”

“Ask her what happened to Charles,” my husband said. “I’d

On Friday of that week things were back to normal. “You

know what Charles did today?” Laurie demanded at the lunch

table, in a voice slightly awed. “He told a little girl to say a

with soap and Charles laughed.”

“What word?” his father asked unwisely, and Laurie said,

his chair and went around to his father. His father bent his

head down and Laurie whispered joyfully. His father’s eyes

“Did Charles tell the little girl to say that?” he asked respectfully.

“She said it twice,” Laurie said. “Charles told her to say it

“What happened to Charles?” my husband asked.

“Nothing,” Laurie said. “He was passing out the crayons.”

the evil word himself three or four times, getting his mouth

washed out with soap each time. He also threw chalk.

out for the P.T.A. meeting. “Invite her over for a cup of tea

“If only she’s there,” I said prayerfully.

“She’ll be there,” my husband said. “I don’t see how they

could hold a P.T.A. meeting without Charles’s mother.”

At the meeting I sat restlessly, scanning each comfortable

matronly face, trying to determine which one hid the secret of

Charles. None of them looked to me haggard enough. No one

had been acting. No one mentioned Charles.

After the meeting I identified and sought out Laurie’s

kindergarten teacher. She had a plate with a cup of tea and a

piece of chocolate cake; I had a plate with a cup of tea and

a piece of marshmallow cake. We maneuvered up to one another cautiously, and smiled.

“Well, he certainly likes kindergarten,” I said. “He talks

about it all the time.”

“We had a little trouble adjusting, the first week or so,” she

“Laurie usually adjusts very quickly,” I said. “I suppose this

“Yes,” I said, laughing, “you must have your hands full in

that kindergarten, with Charles.”

“Charles?” she said. “We don’t have any Charles in the